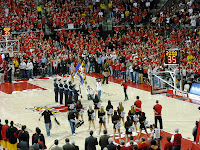 The last lead was 52-51. The game was tied at 60 with 5 minutes to go. Was there more magic in those yellow uniforms? Will we continue to dress like bananas into the future?

I think the answer to both questions might be “no”. Our magic was squashed by some poor officiating and a few missed free throws. One would think that the refs would at the least give us a fair shake. But those dudes costumed as barcodes were in awe of the Dookies.

So we lost 78_67. It was crazy fun for 1/2 hour before the game through halftime. In fact, the crowd was really rocking all the way to the two minute mark.

Where did this tough, resilient team come from? I thought that we were in disarray the last time we looked. Was this the same gang that keeps getting whacked on the road. The Terps were tied with Duke late in the game.

Taking into account the Carolina game and this contest, what a great place Comcast Center is to play. It took 7 years to get to this point. The building finally feels like home. We have one more go at it with Wake on March 3rd at 9p.

Gary and the Bannanas came much closer to getting a win then the score indicates. Just needed a few more foul shots to go intot the basket.

View from the 13th Row

Duke was very physical with our guards. A few fouls were called. When we touched their guards, boom, a foul was called. The refs balanced out the calls late in the game when to outcome was assured. So if you look at the stat sheet, all appears even. Within the game, it did not play that way.

The Terps did a great job of hanging in without Greivis who was on the bench for a long time in the 2nd half with two fouls. Adrian Bowie was quick again. He could not get a few layups to fall. If those go in, it would have been a game changer.

We were quite good considering that three Terps fouled out. Jin Soo got one minute at the end. Burney did not get in. Neither did Brax Dupree for the 3rd game in a row.

Sean Mosley plays hard, but with an ankle that was twisted in the 2nd half, he was a non-factor. And he still can’t shoot.

Cliff Tucker, the new fan favorite, was not sharp on the offensive end. He sure can play some defense. Eric Hayes was very good again this evening. He was smooth, took the ball to the hoop and was plugged in on defense. Landon Milbourne was the player of the game for the Terps. 19 points and 5 rebounds led the effort.

View from the Couch – by Jim Cowan

Stayed up till the last minute last night. Once the fouls started, I headed up. The 3 that put them up 6 was the end. I enjoyed the guy running into Dave Neal. Not sure if you could see it, but K was whining that Neal raised his arms on the block, which was bullshit. Their 7-1 guy absolutely ran Neal over on that one in bounds play. Jay Bilas said as big as Neal is, he was flopping, but when you look at the replay, he was clearly not flopping. 260 or not, his ass got run over. Standard Duke officiating…
What’s Next

At NC State on Sunday, Wake here on the 3rd and then at UVA to close out the regular season. Terps need to win 2 of the 3 to get to the NCAA tournament.

It was a sad ending to an exciting, over-achieving year.  Here is the final post-game show of the basketball season. ... 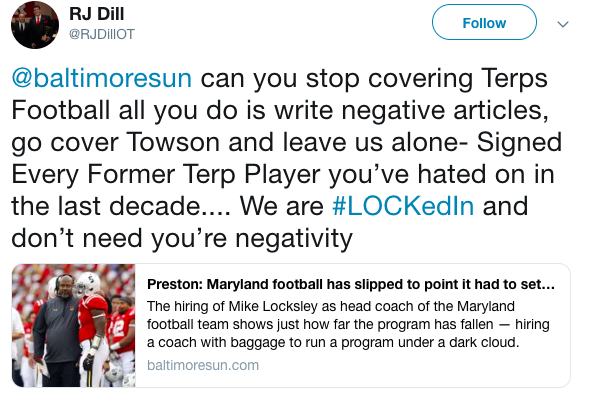 ⁦@baltimoresun⁩ can you stop covering Terps Football all you do is write negative articles, go cover Towson and leave us ...