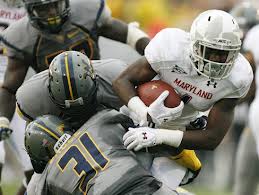 If you’ll join me in the Wayback Machine, Maryland beat NC State 41-23 in that first Homecoming game on October 13th. Maryland finished the year ranked #12 in the polls. On that day, a graduate from the class of 1954 would have looked back on their own first Homecoming with the same distance and perspective that I take to Saturday’s game.

I am sure there is a future sportswriter who will be at the game on Saturday as the first of many Maryland Homecomings. They will look around and see me, now a more mature guy, with thinning hair and gray beard, and think perhaps three things: “you look old,” “you have seen a lot of frustrating football here,” and “it could have been so different if Bobby Ross had stayed.”

I remember coming out early and seeing my team clad in Homecoming all-red with “Terps” in that beautiful script on the sides of their helmets. Bobby Ross still had it going on here in College Park. He left soon after Len Bias’ death and won the national championship in 1991 leading Georgia Tech. He went on to take the San Diego Chargers to their only Super Bowl appearance.

It seems like yesterday, and yet it was all so long ago. Homecoming meant a little more back in the day. Now it’s just another game on the calendar. Even so, we will still have fun at the tailgate. But Maryland needs to get this win against Rutgers to have a successful 2018 season. Maybe a Top 12 finish is out of the question, but they can at least earn a trip to a bowl game.

Maryland looked much better on offense as they defeat South Florida 35-17. ...

Join the TerpTalk crew for a preview of the Wisconsin game – Saturday at 8:30am ...

After a few years of just digital content and radio appearances, (not so much writing), we are relaunching the Capital ...