Capital Sports Blog acc,college basketball,terps,univeristy of Maryland A Bounce Back 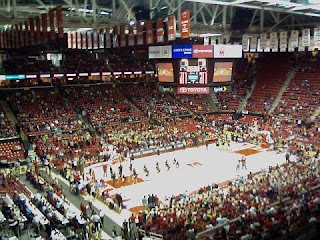 One win can change a season. One singular effort of determination. An act of defiance. Sometimes it does not matter if you are too small, can’t shoot straight or have to play out of position.

It may not concern you that the Internet message boards think your team stinks. Even if you have an 11 win versus 3 loss record before today’s game. What if you don’t care if there are thousands who think your coach (Gary Williams)is washed-up. Even better, what if they think your best player (Grevis Vasquez)is a ball-hog and plays to the crowd.

At this time, we don’t really know if coming back from a 10 point deficit late in the game and closing out the Yellow Jackets with a 9-0 run is the type of gritty win that solidifies a team. But one sure can hope.

Our Terps looked small against the taller Ga Tech team. In fact, many times, we look like 5 guys who are playing basketball and our opponents look like a real, top division team. Sure, we shot 23 for 73 today. And yes, we have a 6’5″ center who would look better playing at the local YMCA instead of in a national power conference like the ACC.

Today was a day that we needed an old-time, tough as nails, cussing and stomping coach. We needed that fire and desire. This is a classic Gary Williams win and boy did we need it.

We can certainly start off with the Terps on a Tuesday. The QB coach and play caller for the New ...

The Terps basketball team had a downer last night.  William and Mary is a good team, we just expect a ...

Saturday was great. Spirits are up. Duke is next. On Saturday, we stayed as long as we could. They were ...