Wow, the sentiment has really turned against Ralph. As was told to me by a client, “It is time for the Fat Man to go.” Saturday’s game really added to that momentum for a change.

As we walked from the parking lot to the game, there were a lot of empty parking spaces. These are the donor spots. You have to give a good deal of money over a long time to get the numbered parking spots in Lot 1. The fact that we are playing a rivalry “style” game and the spots are open speaks louder than words.

I had extra tickets to the game that I paid face value for. I could not find any takers during the week. In the parking lot and on the way to the game I offered them for free. As I got closer to the stadium, I offered to pay $1 to anyone who would take the seats. I could not give them away.

As the clock wound down even my die-hard fan of the week, Jordan, was ready to leave. As you can see from the photo, many had already left. We decided that we were going to stick it out to the end. 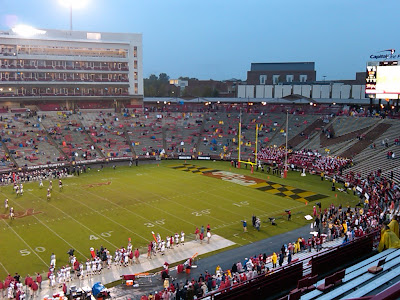 When the Maryland Men’s basketball was announced as the 10 seed in the West Region, the screen should have faded ...

On this past Saturday the Terps took some steps forward in their season.  In addition to a win over Florida ...